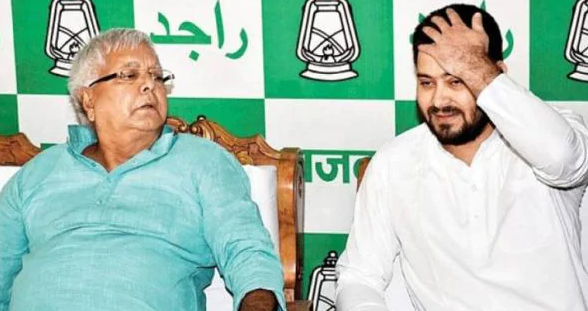 Rashtriya Janata Dal (RJD) chief Lalu Prasad had given political succession to his younger son Tejashwi Yadav almost five years ago, ignoring the claims of other members of his family. The responsibility to pursue Lalu Yadav’s dream is on the shoulders of Tejashwi Yadav, but in Lalu’s absence, RJD is being shattered like cards. Just before the assembly elections, one leader after another is leaving Tejashwi’s support. These include the leaders of the Yadav community, considered to be the original bank of the RJD, which has become a cause of concern for the RJD.
The NDA seems to be united under the leadership of Nitish Kumar for the Bihar Assembly elections. However, the latest statement by LJP leader Chirag Paswan has also sparked discussion about the NDA. But on the other hand, the allies involved in the grand alliance are not ready to consider Tejashwi Yadav as their leader. Former CM Jitan Ram Manjhi still considers him inexperienced, while the Congress is also not speaking openly in support of Tejashwi. Not only this, RJD leaders are also constantly leaving the party due to the stunning.
Also read:

Doda district of Jammu and Kashmir freed from terrorists

Recently, five Legislative Council members have quit the party and joined the JDU, while veteran leaders like Raghuvansh Prasad have resigned from the post of National Vice President. Among the people joining RJD and joining JDU, Qamar Alam Muslims and Dilip Rai Yadav come from the community. Apart from this, now state vice president and former MLA Vijender Yadav has resigned from RJD while former MLA Bhola Yadav has also raised the flag of revolt.

Bhola Yadav is also on the path of revolt

Recently, former MLA from Raghopur Bhola Yadav staged a sit-in with his supporters outside the house of former CM Rabri Devi. In 1995, Bhola Yadav left his seat for Lalu Prasad Yadav, after which Lalu Yadav contested and won from Raghopur assembly seat. After this, Rabri Devi also contested from this seat and won. Bhola Yadav had assumed all the responsibility for the election of these two. Currently, Tejashwi Yadav is an MLA himself from this ancestral seat of Lalu family and Bhola Yadav has threatened to bear the brunt in the election.

Vijender Yadav’s role has been as a kingmaker in Bhojpur area of ​​Bihar. For the last 30 years, he is known as the Yadav face of RJD in Ara and Bhojpur areas. At present, RJD was the state vice president. He was angry with the party for a long time. Vijendra says that now the elders are not being respected in RJD. He said that Lalu Yadav is no longer the Lalu he used to be between 1990 and 2000. Vijendra Yadav’s brother Arun Yadav is an RJD MLA with the message.

Legislative councilor Dilip Rai, who left RJD, was considered the face of the party in Sitamarhi and Shivhar areas of Bihar. Dilip Rai alleged that Tejashwi Yadav is running the party in an arbitrary manner and no opinion of party leaders is being sought. Dilip Rai said that there is no longer an atmosphere of working with respect in RJD. Nitish Kumar’s work has changed the fate and picture of Bihar, due to which he has joined JDU. In this way, many kinds of questions are arising inside the RJD also about Tejashwi Yadav.

The Yadav voter in Bihar is close to 15 percent and is considered a traditional voter of RJD. This basic vote bank of Lalu has an eye on the Yadav community from BJP to JDU. Let me tell you that in 2000, the number of Yadav MLAs in Bihar was 64, which increased to 54 in 2005, and then in 2010 the number came down to 39, but in 2015 it increased to 61.
In the 2015 assembly elections, Lalu Yadav’s party contested 101 seats, in which he gave tickets to Yadavs in 48 seats. 42 of them were successful in winning. Nitish Kumar was successful in reaching power by mobilizing the backward people. To balance Yadav politics, JDU, which fought 101 seats, also gave 12 tickets to Yadavs, out of which 11 had won. The Congress fielded Yadav candidates on 4 out of 41 seats, out of which two won and reached the assembly.
At the same time, BJP-led NDA also tried to keep Yadav politics in the 2015 elections. The NDA fielded a total of 26 Yadav candidates, including 22 from BJP, two from LJP, and two from Manjhi’s party Ham. 6 Yadav MLAs from BJP came after winning.