The day was April 29, the National Aeronautics
and Space Administration, or NASA, said a meteor would pass very close to Earth, or that the meteor could be seen. The National Aeronautics and Space Administration (NASA) also feared that the meteorite could hit the Earth as a result of the Earth’s gravitational force. But the meteor did not fall, the stars fell instead. But it is an absolutely unexpected and unimaginable event that only NASA could imagine what the Bollywood community itself could have imagined!

Now you may  be wondering why I am suddenly talking about Bollywood with NASA, where is the real similarity between them?

Thare similarities and that is why there is so much talk, yesterday was April 29th and on that very day a huge loss occurred in the Bollywood industry, the late Irrfan Khan. A character of the world Bollywood industry is gone.

It can be said that there was almost no comic actor but Irrfan Khan had a serious role. Mr. 100% has made multiple movies like The Killer, Knockout, Gunde, Rogue, Puzzle and they have become hits.

His first Hindi movie was released in 1986 under the name ‘Salam Bombay’, needless to say, it was also a huge hit. He was suffering from cancer for a long time but the last salvation was gone. It’s not too late for the storm to hit Facebook-Twitter-Instagram, again #rip is a trending word. But in the world of Bollywood, that silent wailing remained. The point at which no one heard, did not understand the expression of Bollywood’s mind.

And today is the 30th of April. Like every day, getting up in the morning is a hot news, no! Not happy, sad. Tragic news is bad news. The fall of the star again in the Bollywood industry, the death of Rishi Kapoor. The Bollywood industry could not cope with yesterday’s shock, the scars were still fresh. Just such a time is another big push. 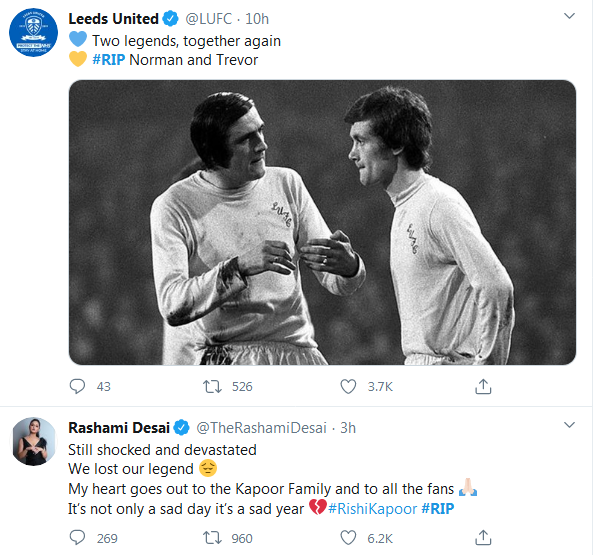 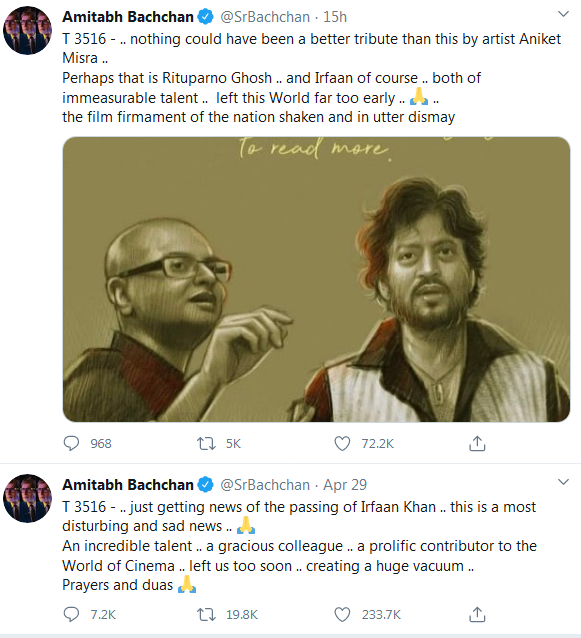 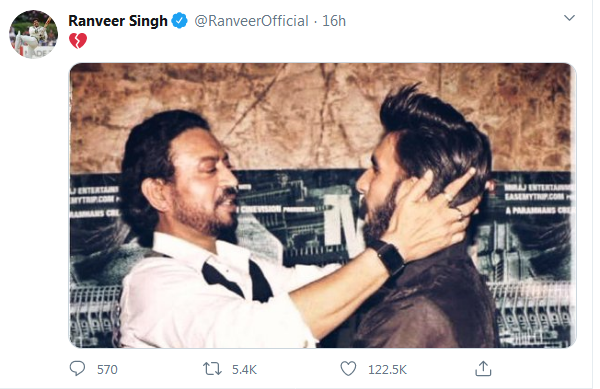 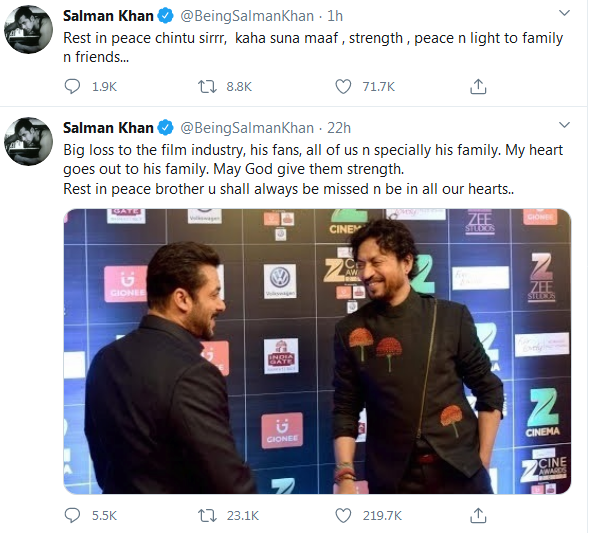 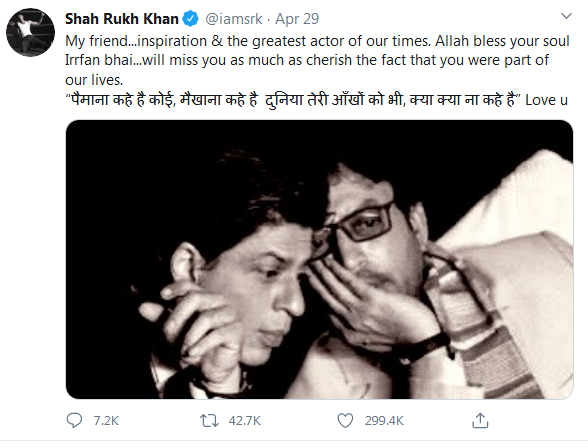 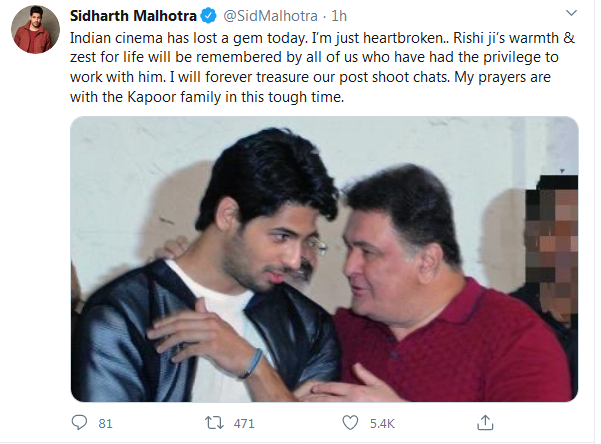 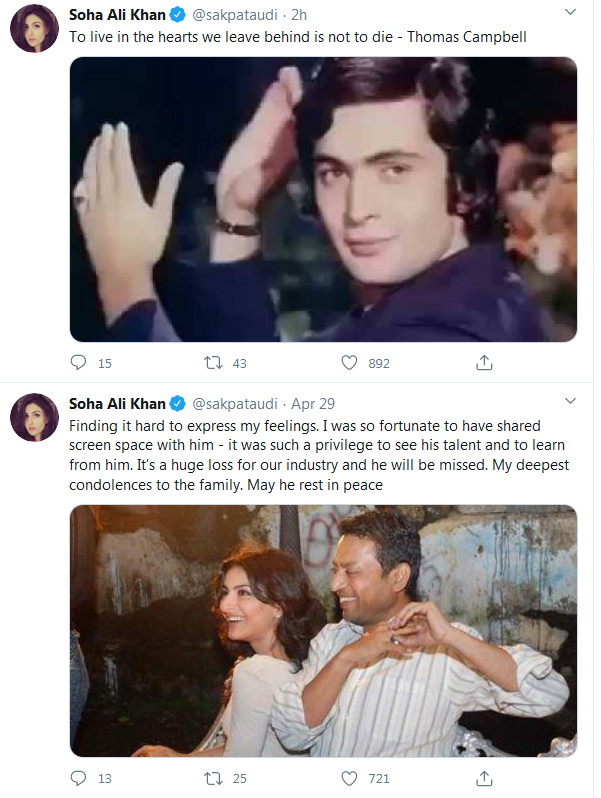 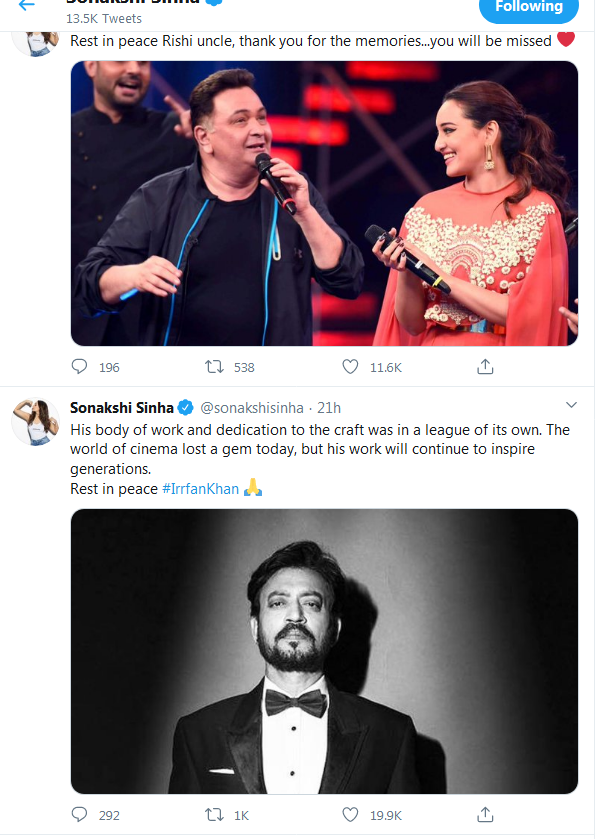 Nothing can be more heartbreaking and tragic than the news of passing away of a dear friend, one of the finest actors and a wonderful human being #IrrfanKhan. Saddest day!! May his soul rest in peace. #OmShanti ? pic.twitter.com/QSm05p7PfU

In early March, when millions of people in China were affected by the corona, India took a great decision. And then we all know what happened, after that curfew lockdown started across the country. Neighboring countries have followed the path shown by the Prime Minister of India, lockdown-lockdown and lockdown has started all over the world. Nobody liked sitting at home in the lockdown. So how many actors and actresses from Bollywood to Hollywood were sitting at home and entertaining themselves alone or with the people of the house, many also posted on their social network side. Among them were Amitabh Bachchan, Shah Rukh Khan, Salman Khan, Aishwarya Rai Bachchan, Sonakshi Sinha, Kareena Kapoor, Irrfan Khan and Rishi Kapoor.

This year is a little different from every time, this year the novel Corona virus has turned everything upside down. Starting with the wedding mushroom, the general party or public gathering is all suspended for now. Closed vehicles, planes and even trains. But this time the novel corona virus is also in the TV industry. Off shooting, off TV serials, short films, even long films. The scandal of the novel Corona virus has not gone unnoticed, even from Tollywood-Bollywood and the Hollywood industry. Among them, a section of the actors were seeing the possibility of loss. But the source said that some of them were also saying that if this damage is locked down, it can be remedied by producing good pictures, the compensation can be paid. But due to the corona virus, the sudden loss in Bollywood in the lockdown, the fall of two stars. Gone, Rishi Kapoor with Irfan.