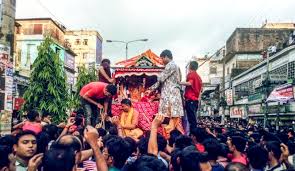 History and story of Jagannath Rath Yatra: Due to virus infection, Puri Rath Yatra, which has been going on continuously for years, has started clouding this time. In view of this epidemic, the Supreme Court has stayed it.
At the same time, a total of 4 petitions, including the Vishwa Hindu Parishad, have been filed in the Supreme Court against this decision, which is being heard in the Supreme Court today (Monday).This petitions demand removal of this ban and review of the order. This rath yatra was to be held on 23 June.
Let us tell you that this Rath Yatra of Puri is world famous. Lakhs of devotees from all over the world come here to see and participate in it. During this journey, devotees pull huge wooden chariots with their hands.
Sri Krishna, Balarama and his sister Subhadra are seated in three different huge chariots involved in this journey. This journey is not only carried out in Puri, but also in Gujarat, one of its forms can be seen. Apart from this, Indians living abroad also organize its short format.

According to mythological beliefs, devotees who contribute to the pulling of these chariots get the benefit of virtue equal to a hundred yagyas. According to Hindu Panchag, this yatra is carried out on the second date of Shukla Paksha of Ashadha month.
This journey has great importance in Hinduism. Under this, Lord Jagannath is taken to the famous Gundicha Mata Temple, where Lord Jagannath takes rest. The water of a particular lake is used for cleaning this temple.
Let me tell you that Jagannath temple is considered one of the four dhams of the country. Lord Balabhadra’s chariot is at the forefront during this entire journey. This is followed by the chariot of his sister Subhadra and finally Lord Jagannath.

Subhadra’s request to see the city

There are many beliefs about this rath yatra. It is said that one day Lord Jagannath’s sister Subhadra prayed for a visit to Dwarka. Then Lord Jagannath, in order to fulfill the wish of his sister, made him sit in a chariot and visited the whole city.
This rath yatra started since then. The huge wooden chariot of Lord Jagannath built during this journey consists of 16 wheels. At the same time, his brother Balaram’s chariot has 14 wheels and sister Subhadra’s chariot has 12 wheels. The journey is described in various religious texts and Puranas.

There is also a belief behind this rath yatra that the birthday of Lord Jagannath Puri is on the day of Snan Purnima i.e. Jyestha Purnima. On that day Lord Jagannath was taken off from Ratnasinhasan along with elder brother Balram ji and sister Subhadra to the bathing pavilion near the temple. He was given a royal bath with 108 urns.
Due to which the Lord gets sick, he has fever. After this, a special room called Lord Osar Ghar was kept for 15 days. During this time only Mahaprabhu could be seen by his chief servants and Vaidyas. After 15 days when the Lord came out of the room after recovering, he appeared to his devotees.
According to the legend, it is also called the new youth night festival. After this, on the second day, Mahaprabhu came out on the highway along with Shri Krishna and elder brother Balram ji and sister Subhadra ji and went to the city to sit in the chariot.

During this journey, there is also an interesting affair behind the idols of Lord Jagannath, Balarama and Subhadra who are seated on the chariot. They are also made from tree trunk wood. But you will be surprised that these idols are sitting on these chariots only in incomplete form.
It is said that Lord Shri Krishna pledged to take the incarnation of Kali-yuga. He came in the dream of King Indradyumna one day and asked him to get his Deity built in the temple by the trunk of a tree on the banks of Puri. On receiving his order, the king requested an old Brahmin to make the Deity.
The old Brahmin, accepting it, placed a condition that he would make it in a closed room. If anyone sees him making these, he will leave them incomplete. When he started his work in a closed room, the voice kept coming from the room for a few days but later the sound stopped coming.
This caused the king to think and his mind began to get distracted. Curiously, one day he opened the room door. As soon as the door opened, the old Brahmin disappeared from there and the Deity remained incomplete. The king became very sad due to this, and with unhappy heart, he got these incomplete Deities installed in the temple.
At that time, the king realized that the old Brahmin who created the Deity was none other than Vishwakarma himself. This is the reason that in the temple of Jagannath Puri there is no stone or other metal idol, rather it is worshiped by making an idol made using tree trunk.