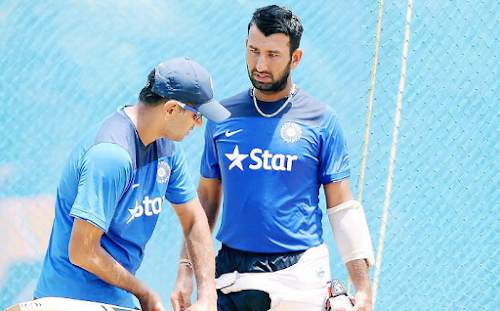 Indian batsman Cheteshwar Pujara praised Rahul Dravid and said that he has an amazing ability. He understand the mantle situation of new players well and help them accordingly. Pujara said this to the cricket website Cricinfo.
Pujara said, “I am lucky because Dravid was around me when I started playing cricket. He had reached such a level that he could tell me and he also told me what to expect from myself. “

Pujara said, “Dravid helped me by understanding my mental situation when I was young and I probably didn’t know everything about technology.” As a young cricketer, I wanted to focus all the attention on technique, then he informed me and told me that other aspects are also necessary with it. ”

Understood the importance of withdrawing from cricket

Dravid’s fan since the age of 13

“I first saw Dravid batting in 2002 at the age of 8,” said Pujara. He hit a double century in Adelaide, which was his favorite innings. I became his fan at the age of 13. He was a fighter. By the time Rahul Bhai was at the crease, it was difficult for the opposition team to take wickets. At the same time, the score of the Indian team also kept increasing. To dismiss Team India, the opposition needed to dismiss Dravid, but they kept going. “
He said, “I watched and learned his technique and nature closely. The way he talks about cricket shows that he has a lot of knowledge, but he never made things difficult, but always kept his game simple. “