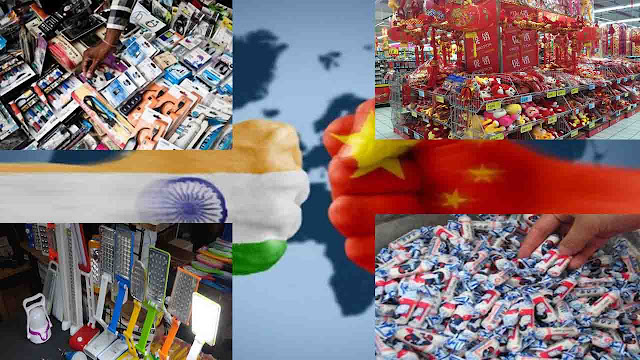 At present, war-like situations are being created due to border disputes between India and China and some soldiers of both countries have also been killed due to the fight on the Line of Actual Control (LAC). In such a situation, in India, it is emphasized that the people of India should not buy Chinese goods, but is it possible for India to do so? Let us try to learn in this article.

The Confederation of All India Traders (CAIT) has come out openly regarding the boycott of Chinese goods. CAIT has launched the ‘Indian goods-our pride’ campaign to boycott Chinese goods.
CAIT has made a list of about 3 thousand products imported from China. From which today a list of 500 items has been released. There will not be any impact on India due to the non-import of these items because all those things are already being made in India.
According to CAIT, they aim to reduce India’s imports of Chinese goods by about $ 13 billion, or 1.5 lakh crore rupees by December 2021.
CAIT added to the products list Rose-Marra items, toys, furnishing fabrics, textiles, builder hardware, footwear, garments, kitchen items, luggage, handbags, cosmetics, gift items, electrical and electronics, fashion, watches, Items like jewelry, clothes, stationery, household items, furniture, lighting, health products, packaging products, auto parts, Diwali and Holi items, goggles are included.

What goods does India bring from China?

Mahatma Gandhi had said that we need to be free from the use of foreign goods, but he also said that this will happen only when we make our own things. When Modi’s ambitious plan.
Foreign investment is also happening in ‘Make in India’, then the boycott seems inadequate. Only we can beat China against its durability. We cannot run a boycott campaign only because of the use of Chinese skirting and firecrackers during the festive season.
China and India are the two great superpowers of Asia. Instead of violence in the Galvan Valley, voices are being raised about ending business relations with China. However, the question arises whether it is possible to completely boycott Chinese products.

India imports items such as radar, transmission equipment for televisions and cameras from China. We also rely heavily on China for electrical transformers, microphones, headphones and loudspeakers. Electrical machinery imports from China stood at 34 percent in 2019.

According to UN Comtrade data on international trade, India imported $ 13.87 billion worth of nuclear reactors and broilers from China in 2019.

India imports diammonium phosphate from China. It is used to make manure. Urea is also supplied from China.

India relies on China for items such as personal protective equipment, ventilators, N95 masks, and other medical kits. These items are quite important in times of epidemic. By the way, to meet the demand, India has started making PPE kits and N95 masks on its own on a large scale.

As we have seen, India brings many such things from China at a very low price, due to which India’s savings are very high. And there are some things that even if you want to build India, the product which seems productive to make that thing will also have to be brought to India from other countries. Commercially, every country is commercially connected to each other.