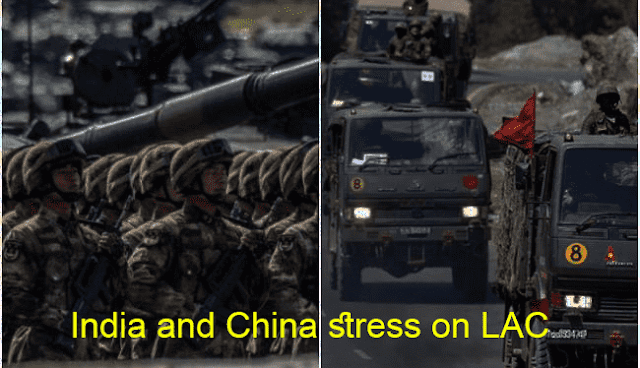 In the talks between India and China at the military level, both sides have emphasized on the border to reduce tension in an early, phased, and sequential manner with priority. Military sources said that in the talks, both sides were committed to reducing tension on LAC. Sources also say that further meetings are likely to take place between the two sides at military and diplomacy levels to end the deadlock. Sources believe that the process of ending the deadlock over LAC is very complex.

Sources said that the forthcoming meetings will try to resolve the issue on the basis of bilateral agreements and protocols by mutual agreement. In this third meeting, both sides insisted on retreating in a phased manner, at the earliest. Military sources said the process of ending the deadlock over LAC is complex.

Let us tell that in order to end the deadlock on the Line of Actual Control (LAC), the two countries had a core commander level talks in the Chushul sector on Tuesday i.e. Tuesday. The third round of this meeting between the military officers lasted for 12 hours and ended at 11 pm.

Sources said that this conversation of the Corps Commander Level went on for a long time and it followed the Kovid-19 protocol. At the meeting, India bluntly told the Chinese side that it would have to restore its former position on LAC.

Let us know that several rounds of negotiations have been held with China so far. Every time he talks about reducing stress, but there is a clear difference between his words and actions on the ground.

If sources are to be believed, China has deployed a large number of its soldiers at LAC in Ladakh. The People’s Liberation Army (PLA) has deployed more than 20 thousand soldiers on its LAC near East Ladakh sector.

Looking at the antics of China, India has also deployed its two divisions. According to sources, China has only two divisions stationed in this area, but this time it has also put around two additional divisions in its area as a backup.

Amid tensions from China, Union Defense Minister Rajnath Singh and Army Chief General Manoj Mukund Narwane will visit Leh along the Line of Actual Control, LAC on Friday to review the security situation in eastern Ladakh.

Due to China’s tactic, military preparations on the border have been kept intact. China has increased military deployment on the Line of Actual Control, LAC. India has also deployed troops at the same level so that any action of China can be given a befitting reply. At the same time, the third round of talks at the level of the corps commander is on. In the talks, the two sides insisted on the LAC retreating as soon as possible.

Army Chief General MM Narwane met the jawans undergoing treatment at the Army Hospital in Leh on 23 June. After this, he also went to the front of Ladakh, where he encouraged the soldiers present. General Narwane assured the soldiers that the entire army stood with them when needed.

After returning from a two-day visit to Ladakh on 26 June last, Army Chief General Manoj Mukund Narwane met Defense Minister Rajnath Singh and apprised him of the situation in the Ladakh sector. Prior to this, the Army Chief was on a two-day tour in East Ladakh. During this time he also inspected near the Line of Actual Control, LAC.

It may be known that 20 Indian soldiers were killed in a violent clash between the two countries in the Galvan Valley in eastern Ladakh on the India-China border. However, China has not reported the casualties or injuries to its soldiers.

China has increased its strength in Ladakh amid continuing tension over the Line of Actual Control (LAC). The People’s Liberation Army (PLA) has deployed more than 20,000 of its troops on the LAC near the East Ladakh sector. India continues to be a city on China’s antics. In view of this, India has also deployed its two divisions.

According to top government sources, the Chinese Army has deployed around two divisions (around 20,000) along the LAC in the eastern Ladakh sector. There is another division (10,000 troops) that weighed in northern Xinjiang province, which is about 1,000 kilometers away, but due to the flat areas on the Chinese border, they can be mobilized to reach our border in a maximum of 48 hours.

China has not reduced the number of soldiers

Sources said that we are keeping a close watch on the movement of these soldiers, who have been deployed close to the Indian border. He said that even though India and China have been talking at the diplomatic and military levels for more than six weeks, there has been no reduction in the number of troops or equipment from China on this front.

There is no hope of reducing stress soon

Sources say that despite talks with China at the military and diplomatic level, it seems that it will take a long time to resolve the crisis. India is also preparing itself for this. The deployment of the border between the two countries is expected to continue till September-October until snowfall starts in a large scale in high altitude areas.